Real estate portion for residential use, canteens, services and a car box, situated in the historical centre of Bologna. The property of notable historical and artistic interest, with refined decorations was realized in the 15th century and is on the corner of Via Oberdan and Via S. Niccolò.

The building in which the properties are located has a four side plan ad is on three floors as well as a basement. The main prospect of the building, that looks onto via Oberdan, has an entrance with clay tiles and a rich ceiling with decorations and wood decorations with motives and leaves. The property is made up of a noble floor with nearby areas: on the ground floor there is a garage with access onto Via S. Niccolò; on the first floor there is an apartment made up of a bedroom, three rooms, a dining room, a living rooma, a study, two bathrooms and a kitchen; on the third floor there are service areas while in the basement there are canteens. The entire complex was declared of historical and artistic interest. With letter prot. 59694 dated 11/12/2013 the authorisation for alienation was requested according to article 56 of Legislative decree n. 42/2004 and following afterwards integrated by letter n. 75536 dated 20/11/2014 following the request of the Regional directorate for Heritage of the Region Emilia-Romagna and the Ministry of Heritage and Tourism (prot. 15223 dated 27/10/2014). The authorisation was issued with order n. 3461 dated 26/11/2014 and sent with registered letter n. 17947, dated 16/12/2014 with prescriptions. The property is classified by PSC in the municipal territory of the Structured urban territory in the historical area under area of antique formation. Detail of surface per floor: Main apartment Basement m². 74.59 Ground floor m². 15.50 First floor m². 471.43 Third floor m². 71.12 Garage Ground floor m². 36.31

The real estate portion is situated in the historical centre of Bologna (388,367 inhabitants), part of the Metropolitan City of Bologna (1,009,210 inhabitants), in the Region of Emilia-Romagna. The building of which it is part is delimited by via Oberdan and via S. Nicolò, and is in the historical centre of the City of Bologna, area densely and built with a rich articulation of functions; residential, commercial, administrative and craftsmanship. The area is completely within the Limited Traffic Zone, characterized by very few parking areas but of high commercial and business interest. In the nearby area there are the most significant monuments of the city, of which to be remembered: Piazza Maggiore, the Torri degli Asinelli, numerous churches and historical palaces. The railway station “Bologna Centrale”, that guarantees connections with the main Italian cities through the high speed line is 1.5 km form the property, while the international airport “Guglielmo Marconi” (8th Italian airport with 8.2 million passengers in 2017), is about 11 km from the area. The northern road to Bologna, which allows you to connect into the Highway is 5 km from the property.

Real estate portion for residential use, canteens, services and a car box, situated in the historical centre of Bologna. The property of notable historical and artistic interest, with refined decorations was realized in the 15th century and is on the corner of Via Oberdan and Via S. Niccolò. 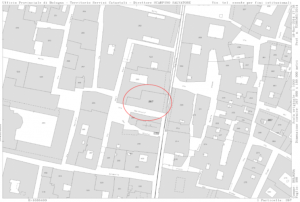