The property complex, former branch of the Bank of Italy, is located in the historic centre of Brindisi, close to the city port. The building, built in 1930 and used as offices and residential building, has been declared historic-artistic dwelling in accordance with Legislative Decree no. 42/2004.

The property complex is divided into three separate buildings and consists of 4 units of real estate: 2 residential units (1 cat. A / 2 and 1 cat.A / 3), 1 unit to be used as a bank (cat. D / 5) and 1 as a garage (Cat. C / 6). The building, a former Bank of Italy branch, was constructed between 1925 and 1930 with a substantial masonry structure and subsequently expanded and renovated (1970). The main building (former branch office) overlooks the square and consists of 2 floors above ground, while in the back of the property has 4 floors above ground, as well as a basement and the roof covering that contains technical equipment. The other part of the building, accessed from V. V. Emanuele II, no. 3, is made up of an outdoor area used as a yard and a garage. The complex is currently free and is in good condition.

The property is located near the old town of Brindisi (pop. 87,820), the capital of the province with the same name (pop. 397,083) in the Apulia Region (pop. 4,063,888), in the square closest to the port, characterized by important historical properties subject to protection by existing urban planning. The building is within easy reach of major city services including the post office, theatre, and cinema. Also in the immediate vicinity are the main public offices, such as the Municipality and the Province offices, as well as other important tertiary poles (the Port Authority, the Provincial Department of the Treasury and the Maritime Military Arsenal). The railway station, on the Ancona-Lecce line, is located 1 km from the property. The port of Brindisi, an important commercial port, provides ferry connections to Greece (Corfu, Igoumenitza, Patras, Kefalonia and Paxos) and Turkey. The the SS-16 crosses the city, an Adriatic road linking Padua with Otranto. By way of the SS-7 and the SS-106 the Jonica goes to Reggio Calabria. The A-14 motorway, which runs from the Adriatic ridge to Ancona, can reach via Taranto or Bari. Papola-Casale Airport (2.3 million passengers in 2016) is 6 km from the city centre.

The property complex, former branch of the Bank of Italy, is located in the historic centre of Brindisi, close to the city port. The building, built in 1930 and used as offices and residential building, has been declared historic-artistic dwelling in accordance with Legislative Decree no. 42/2004. 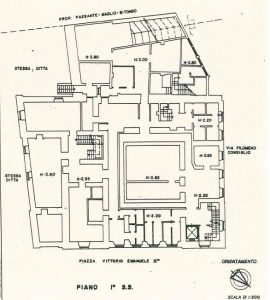