The area being developed is located within Milano Porta Genova railway station, in a semi-central area of the city near the Navigli, a very popular district especially for leisure activities.

Porta Genova yard runs in part parallel to the route of the Naviglio Grande and in part wedges into the urban fabric until it reaches the ancient Spanish ramparts. The building context is representative of the historical and urban evolution that has affected Milan in its various passages from pre-industrial to post-industrial city. The historic location of the Naviglio Grande has imposed itself as the original ordering element, which over time has been joined by transport networks, first by road and then by rail, having the same origin and destination as the waterway. The area around the northern part of the yard, wedged in the urbanized Milan area, is characterized by a residential building complex dating back to the early 1900s and one that can be traced back to the typical dimensions of the villages that developed outside the historical boundary formed by the Spanish walls and overlooking the system formed by the Navigli and the Darsena.

The intervention area is located in a semi-central district of the Municipality of Milan (1,337,155 inhabitants), which is the capital of the province (3,196,825 inhabitants), the 1st Italian municipality of the Region, Lombardy, (10,002,165 inhabitants) and the 2nd largest municipality of the country in terms of residents after Rome, the capital city. The area affected by the redevelopment project corresponds to the railway station’s perimeter which is now rarely used. This part of the city is particularly attractive thanks to the Navigli, one of the most popular districts of the city, its proximity to the Darsena, Porta Ticinese, the seats of two universities, Bocconi and Sacro Cuore, Via Cristoforo Colombo, Corso Genova and Via Torino. The area is well served by surface public transports, both trams and buses, and by the underground, line 2; the stop is near the current building of the old railway station. 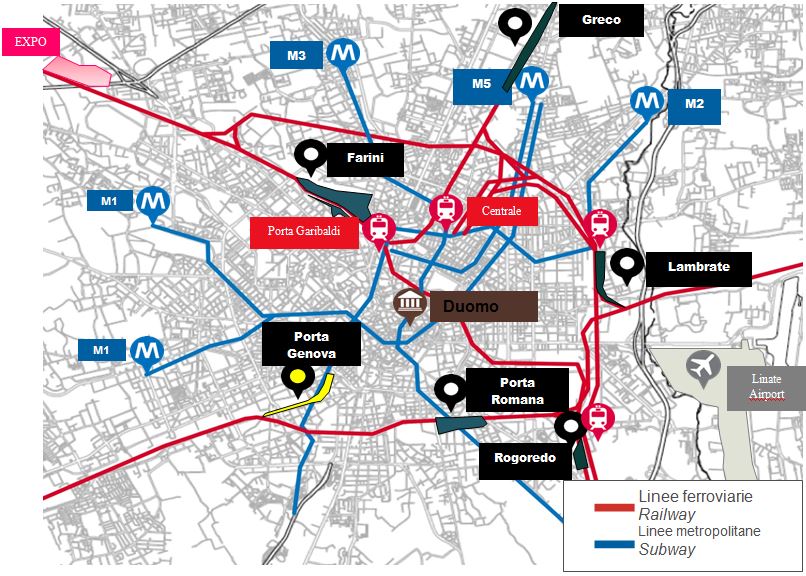 The area being developed is located within Milano Porta Genova railway station, in a semi-central area of the city near the Navigli, a very popular district especially for leisure activities.