The complex consists of four towers (four free-standing buildings), each one spread over 8 floors.
Full ownership is sold through public call with the telematic auction system “RAN”, which is the platform of the National Council of Notaries.

The four towers are made as follows:

The property includes outdoor areas made of private gardens, appurtenant to the ground floor spaces, private indoor and outdoor parking spaces, an outdoor car park of public use, driveways and pedestrian walkways of public use for a total of 4.438,00 sqm.
The four towers can be considered as detached buildings, since they don’t adjoin other buildings, while they are surrounded by outdoor areas destined to private green areas and pedestrian walkways.

The four towers, currently unused, were formerly used as Residence, Nursing Home and dwellings for a total of 140 apartments.

The four buildings are in need of maintenance work.

The estate is in the district of San Sisto, a hamlet in the municipality of Perugia, which is at 4,39 km.
At about 500 m. there are a kindergarten, a primary and a secondary school, and there is a sports field at a few metres. Perugia, inland in central Italy, is at about 150 km from Florence, Rome and Ancona, and at about 400 km from Milan, Genoa and Naples.

Perugia can be reached by train as follows: from the north, from Florence, there are frequent trains to Terontola/Cortona (1/2 hr), where it is possible to take the train to Perugia (30 to 50 minutes); from the south, from Rome, there are nine trains in a day on the line to Ancona, and getting off in Foligno it is possible to change to Perugia (30 to 35 minutes). Perugia has its own international airport “San Francesco d’Assisi” in locality S. Egidio, at 12 km from Perugia, however the nearest main airports are Rome, Pisa and Florence, from where Perugia can easily be reached by train, bus, or car.

The complex consists of four towers (four free-standing buildings), each one spread over 8 floors.
Full ownership is sold through public call with the telematic auction system “RAN”, which is the platform of the National Council of Notaries.

This property is part of the project: 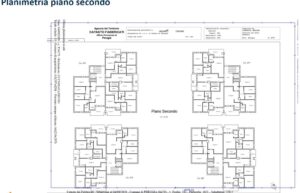